After a tiring trek to Arnamala hills and waterfalls, every inch of my body was aching. It was begging for me to take some rest. (Of course the view was fantabulous and the waterfall was divine) On hearing that further one trek should be done to reach Ambukuthi hills, where our troop’s tents will be pitched for the night’s stay, I lost my head. Know more about waterfalls in India.

The simple trail looked complicated to me. For each step I took, I got a lot dizzier. Finally, around 11.30 pm – 12 am, we reached the hills. My eyes were zoned off; it was dark that I wasn’t able to see anything clearly including people who were around me. I felt chill air cuddling me with its arms. I held my jacket closer, to keep me warm. I could hear people’s excitement, laughter. More or less I would say I was physically present and mentally worn out. All I was waiting for was someone to come and pitch my tents, so that I can go and lie down. My prayers were heard, within some time, tents were ready to be occupied. Most probably, I would’ve been the only person to rush into it amid others who were chitchatting, staying outside sitting on the rocks. I remember pulling off the sleeping bags till my neck and closing my eyes. I went to deep sleep.

I heard something. Is that a song? I didn’t wake up, but my mind was distracted by some music. I know I’m getting disturbed from sleep. But I couldn’t open my eyes. The voice was shrill. It was so sweet that one would want to hear this for a lifetime. The notes and pitches were perfect, without any cracks. I wasn’t able to restrain myself more, that I got up. Time was 3 am. Not bad, I have slept for two and half hours. Now, who is singing? I was curious to know.

I unzipped my tent and came out. Some of my trek mates didn’t sleep, they were just lying on the rocks, talking. At some distance, I saw a figure with a guitar in his hand, singing ‘Channa Mereya’. Along with him, there were two more of them. I could see something shining. Is that a beer bottle? Um, maybe. I sat there, facing them. That singing guy’s hands were playing with his guitar and his voice was like honey in the stream. I was completely immersed. It was so dark that I couldn’t see his face, he had long hair but. I don’t know how long I stayed, but I would say, I didn’t regret sitting there, freezing. Listening to his songs, from Hindi, Malayalam and Tamil was like attending a concert, for free. That perfect, that classic. I wanted to ask him to sing ‘Cherathukal’ song for me. But I didn’t move a bit from my place.

I looked up into the sky, it was clear. I could see the stars twinkling. I looked around. It was so peaceful. Calm night, pitched tents, shining stars and a guy with a guitar singing. Doesn’t it feel dreamy? Oh yes! To me, this looked like a fairy tale. Like, it was both magical and musical. It was a treat.

I decided to sleep, because we will have to go to Iruppu waterfalls later that day and it requires some moderate level of walking. But I know one thing for sure; I’m going to find who that person is, in the morning, once I wake up and right away go and talk to him. Just a compliment; ‘You sang well, your voice is too good. Soon you will reach heights’. Because, I know how valuable a single appreciation is.

People who know me, know how much I love music. Not an expert though, but a learner and an admirer of this art. I’m forever grateful for how music has changed my blues on some cold nights, how it has tamed me during my tough days, how it has supported me by being a constant companion, till now. It’s not the guy I’m looking for, but instead, his voice.

I woke up. I regretted missing the sunrise. The sky was bright, but it was still cold. My eyes searched for that guy. He wasn’t there. I could see the empty bottles lying around. I asked, each and everyone around me, ‘Did you see that singing guy?’ Some didn’t and a few said yes.

‘Where is he now?’
‘He has already left the campsite.’
‘What? No. Okay, do you know his name?’ ‘Sorry, didn’t know that.’
I got the same answer from those few, who saw him.

I was devastated. I couldn’t take it. Like, I was so close and even then, I missed. I could’ve talked to him that night itself. But something stopped me from doing it. Maybe that late night time, those bottles or maybe I was completely mesmerized by his songs, that my feet refused to stand up and my mouth refused to utter a word. I don’t know.

And, it was time for us to descend the peak. With a heavy heart I gathered all my stuff and was ready to leave. I wished he would never stop singing in his entire life. Someday he might become a playback singer. And someday I’ll be able to compliment him. For, voices like that, shouldn’t be wasted. It should be celebrated. 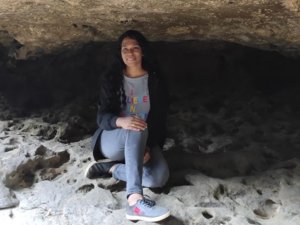 Hello people! I’m Arunalakshmi, a law graduate and currently an aspiring student of Journalism. I love to write, write and write. I have always dreamt of becoming a writer and so thought of trying my hands in Journalism after a tedious integrated 5 years of law degree. Because, it’s better to be late than never. One day or the other, I believe to achieve what I aim for. Fingers crossed. Travel has always given me a great confidence and a space to get to know more about myself. I’m just a beginner in this genre, getting better and better every day, learning from my experiences and mistakes.

Must Read: Best Places to Visit in India This Winter